Azerbaijan's SWF Boosted by Pivot to US Equities

The surge in oil prices coupled with a bull market in US public equities helped deliver Azerbaijan’s sovereign wealth fund a robust return and a boost to total assets under management in 2021, said Global SWF using the latest data from the State Oil Fund of the Republic of Azerbaijan (SOFAZ).

SOFAZ reported its second strongest return in 2021 at 4.5% with AUM exceeding US$45 billion on the back of strong expansion in public equities and exposures to North America.

The fund has accrued US$10.2 billion since its inception, most of which was generated over the past decade. In 2021, it received AZN12.7 billion in oil and gas revenues and AZN3.3 billion from portfolio assets, while transfers to the state budget totalled AZN11.4bn, leading to a net boost of around AZN4.6 billion (USD2.7 billion).

SOFAZ claimed that in 2021, “each asset class positively contributed to the overall investment portfolio return, with lion’s share of the returns coming from equity investments.”

However, Azerbaijan’s sovereign wealth fund remains conservatively invested in low-yield fixed income, which comprises three-quarters of total asset allocation and delivered a nominal return. No doubt, public equities delivered the strongest result, growing by US$1.6 billion to an estimated US$8.6 billion on the back of a bull market in US stocks. Despite SOFAZ’s claims, real estate and fixed income had a negligible impact on its returns and there was a perceptible shift from bond holdings.

The increased allocation to North American assets and US dollars has come at the detriment of European markets and euro holdings, while gold remained at 13% of the portfolio.

Azerbaijan’s state-owned investments are divided between SOFAZ and Azerbaijan Investment Holding (AIH), which was launched in August 2020 and modelled on Kazakhstan’s Samruk-Kazyna. With AUM totalling USD22 billion, AIH seeks to improve the management system and operation of state-owned companies and enterprises including national oil company SOCAR, as well as entities with partial state ownership. 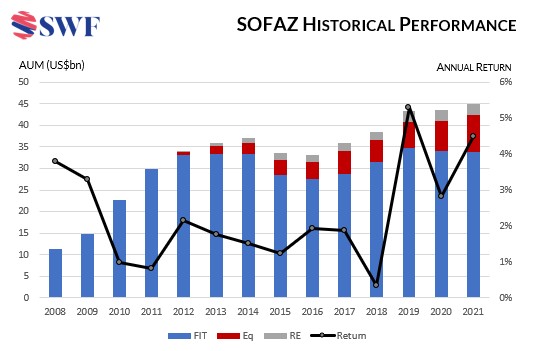 The AIH is also tasked with increasing attracting private investment, fostering public-private partnerships, and preparing for the possible privatization of state entities. In October 2021, AIH signed a Memorandum of Understanding with Samruk-Kazyna for increased cooperation around in  oil and gas sector and transportation and logistics in the context of the Belt and Road Initiative. They certainly have the firepower and portfolio companies to lead change their countries.

By contrast, SOFAZ’s creation in 1999 came against the backdrop of implementing the country’s oil strategy, aiming at the efficient use of the domestic oil reserves and the management of oil revenues for the prosperity of the people. As such, SOFAZ acts as a savings fund, while AIH is oriented towards strategic investment, leading to a radically different asset allocation strategy.

It remains to be seen whether AIH follows its Kazakhstan peer as it prepares to privatize its holdings. Such a development would turn it into a much more active investor, potentially more on the lines of Singapore’s Temasek if it chooses to press into foreign acquisitions and private equity. The government has already mooted the prospect of privatization of SOCAR, which could create significant dry powder for further investment, although the pandemic has prompted the government to row back on this idea.

As a result, the lines between SOFAZ and AIH could become more blurred, leading to potential merger, especially if SOFAZ seeks to diversify holdings by liquidating some of its massive fixed income portfolio and redeploy into private markets, including real estate which currently comprises just 6% of AUM. 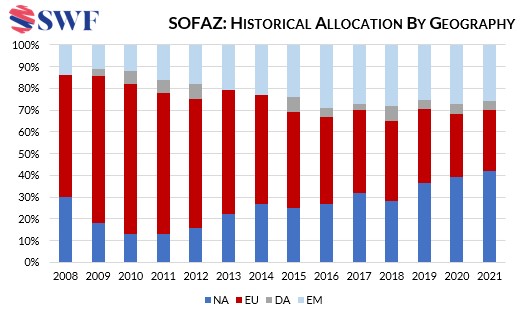