The merger of Australia’s QSuper and Sunsuper creates the country’s second biggest public pension fund with AUM of US$152 billion and two million members, sending the combined entity up the global league table to 22nd place, between Denmark’s ATP and behind Canada’s BCI and PSP Investments.

The combination of QSuper and Sunsuper follows a trend of consolidation in Australia, where regulation has favored improving economies of scale that can lower members’ fees.

While QSuper would provide more than three-quarters of the asset base, Sunsuper would contribute 70% of the members. With both legacy funds drawing membership from Queensland, the new fund will be based in Brisbane and top management positions have already been appointed. They include Sunsuper’s Ian Patrick, who will be CIO, with the position of deputy CIO awarded to Charles Woodhouse, QSuper’s current CIO. The CFO will be former director at Credit Suisse Australia, Anthony Rose, who previously served as acting CEO of the Bank of Queensland. Sunsuper CEO Bernard Reilly, previously at TCorp, will take the helm of the merged fund, while the chair will be taken by Don Luke, currently chairman of QSuper.

Reilly said, “The executive team has a blend of experience and background and, most importantly, a shared commitment to the best financial interests of our members. These appointments are another important step in setting up our merged fund for success and the Board and I are confident this executive team is well placed to deliver for our members and our people.” 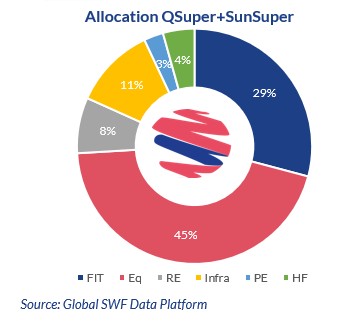 Following an analysis of the portfolios of both constituent funds, we find that the combined fund will still have a significant allocation to public equities (45%) and fixed income (29%), while real assets comprising infrastructure and real estate will total 19% of AUM, leaving private equity with 3% and hedge funds with 4%.

Due to the difference in asset allocation, the funds have very different returns with the latest results showing QSuper’s one-year return at 13.4% and Sunsuper at 19.7%. Global SWF’s analysis finds that the combined entity would have an annual return of 16.0% in the recent financial year, ending June 30 2021.

The management of each fund is however very different. A large portion of Sunsuper’s portfolio is externally managed, while QSuper has a large internally managed portfolio. The integration of these portfolios will require a significant change of culture for members of both funds’ investment teams.

It’s likely that the consolidated fund will seek to emulate other funds of a similar size and liquidate some holdings in stocks and bonds to invest in alternatives. Net zero is also set to be a theme in the new entity’s priorities. QSuper members have become increasingly concerned over its commitment to combating climate change and have urged it to divest from high-emitting assets. According to a legal letter by some members, the merger between QSuper and Sunsuper is an opportunity for the former to “improve its approach to understanding and managing climate change risks”.

As such, there is anticipation that the new fund will put climate change at the top of its priorities with strong ESG credentials leading to a push into renewables infrastructure. 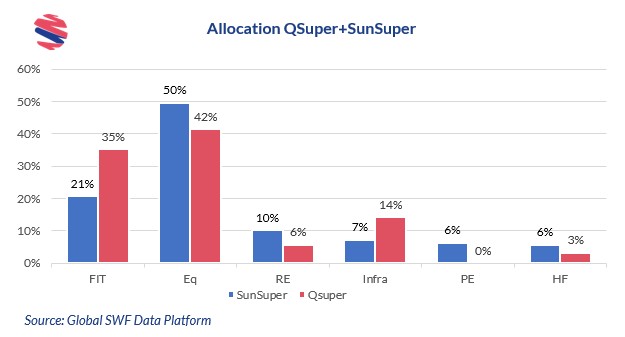