The Abu Dhabi Investment Authority (ADIA) has teamed up with Singapore’s SC Capital to establish a data center platform, which is set to reach US$2 billion in equity.

The platform will invest in Developed Asian economies, where state-owned investors have focused much of their attention in data center investments. ADIA previously became the largest investor in Gaw’s internet data center platform’s US$1.3 billion fundraise in 2020,enabling it to expand into new Asian markets beyond China.

Of the US$8.8 billion in SOI capital allocated to the sector from 2017 (inclusive of the planned US$2 billion from ADIA), 51% was devoted to Developed Asian countries such as Australia, Japan, Singapore and South Korea. Investment has accelerated over the past year due to increasing allocations to this region.

South Korea is a notable target for growth. According to IDC Korea’s “Korea Cloud IT Infrastructure Market Forecast”, the Cloud IT infrastructure market in Korea is expected to reach an average annual growth rate of 15% over the next five years, reaching approximately US$1.86 billion in sales by 2025. The Global Interconnection Index, an annual market study recently published by Equinix, also estimates that Seoul will have the most interconnection bandwidth from hyperscale providers within Asia-Pacific by 2024.

Singapore also stands out as a focus of attention and is ranked joint second with Silicon Valley among data centre markets globally, according to Cushman & Wakefield’s 2022 Global Data Center Market Comparison. In February, Abu Dhabi sovereign fund Mubadala made a US$350 million equity investment in Princeton Digital Group (PDG), a Singapore-based pan-Asia data center operator. PDG's existing shareholders – New York-based private equity firm Warburg Pincus and the Ontario Teachers' Pension Plan Board (OTPP) – made follow-on investments as well, lifting the combined investments for the funding round to more than US$500 million. The company currently has 600MW of capacity in operation or under development, with 20 data centers in 14 cities across five countries in the Asia-Pacific region. With its latest equity infusion, PDG plans to add at least another 200MW of capacity by 2024 and by 2027 aims to have an additional 10-20 data centers and double its current capacity. 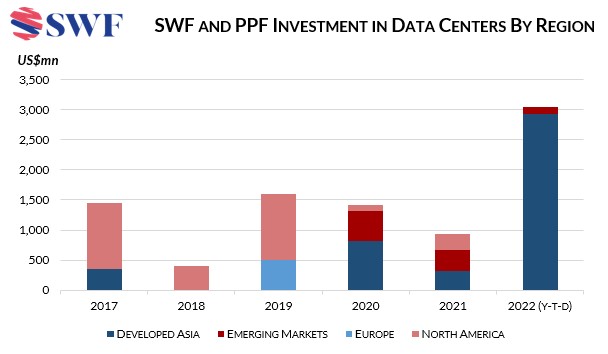 The chief challenge of the data center sector is reducing its carbon footprint. Data centers are notoriously energy hungry and Singapore’s 70+ facilities represent more than 7% of national electricity consumption. Growth in data centers in the city state will conflict with its ambition to halve its carbon emissions by 2050. Similar challenges face other markets. Singapore imposed a moratorium on new data centers in 2019, which was finally lifted in July, to address the dearth of space and energy.

Dr. Janil Puthucheary, Senior Minister of State, Ministry of Communications and Information, said, “IMDA and the Economic Development Board (EDB) will pilot a Call for Application to facilitate the calibrated growth of data centers that possess the best-in-class techniques, technologies, and practices for energy efficiency and decarbonization.

“Singapore is committed to fulfilling our environmental obligations under the 2015 Paris Agreement, and greener data centers will allow us to do so, while at the same time supporting the growing needs of our Digital Economy.”

Singapore is also increasingly in competition with Southeast Asian competitors, notably Indonesia where e-commerce is flourishing, spurring growth in data centers. It is also facing limitations in local skills, requiring a significant investment in human capital and attracting foreigners to join the workforce.