With a penchant for trophy assets, Saudi Arabia’s PIF, Qatar’s QIA and Abu Dhabi’s ADIA are reportedly interested in the group whose starting price has been set at GBP4 billion. The property includes four Selfridges stores in the UK, Brown Thomas and Arnotts in Ireland and De Bijenkorf in the Netherlands.

QIA is a heavy investor in London’s premium real estate market, including Selfridges’ rival Harrods which it acquired in 2010, several luxury hotels, and a significant office portfolio that includes Canary Wharf and Europe’s tallest building the Shard. ADIA’s portfolio is smaller and includes the London Edition Hotel in Mayfair. PIF has yet to make a mark, but the Saudi fund is keen to diversify its foreign holdings and asset classes.

Selfridges is not merely a retail property portfolio, it is a business concern that has seen profits surge over the past decade due to strong investment in its stores. While department store chains have been hammered in recent years, including the collapse of Debenhams, Selfridges has gone from strength to strength. It did not escape the ravages of the pandemic and was forced to cut 14% of its workforce. The pain is not over with lower footfall and fewer tourists coming through its doors in key locations, such as its flagship Oxford Street store.

Altogether, state-owned investors have invested tens of billions in London’s premium real estate – and intense price growth before the crunch in late 2014 means the value of assets is far greater.

Yet, trophy hunting is tempered by the need to leverage yield. Until recently, the British capital offered opportunities to capture high, stable yields, particularly for Middle Eastern funds. Interest dried up following the 2016 referendum on the UK’s membership of the EU, which was followed by years of uncertainty. In 2017, the UK represented little over 1% of total SOI investment in real estate, down from 10% in 2016 and a peak of 34% in 2013. At the same time, SOIs virtually vanished from the London office market after the referendum. The market was already cooling due to tougher planning laws and higher property taxes, including capital gains tax for non-UK residents and increased stamp duty, as well as tighter money laundering regulations. 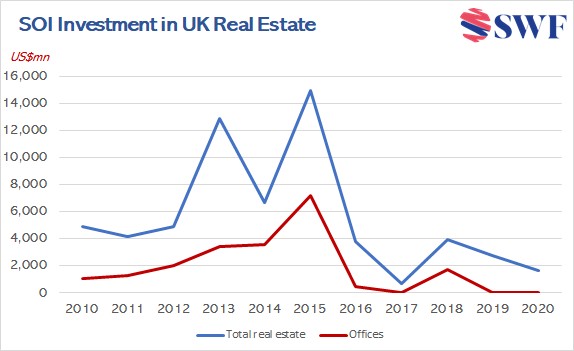 In terms of their UK real estate strategies, state-owned investors quit the London premium property market for more regional markets and diversifying into other segments, in particular logistics. These markets are where price growth has been highest. Yet the prime London property market has proven highly resilient during the pandemic and prices are now recovering as investor interest returns.

With a deal of sorts with the EU and the prospect of the pandemic receding, London’s prime market is set to be the fifth fastest growing in the world with prices forecast to rise 3.5% in 2021, according to a recent survey of top cities by real estate experts Astons. The rate of growth is higher than the global average of 1.8%. The study also found that London retained one of the highest value prime markets, placed third behind Monaco and Hong Kong. Savills also reported that Q221 saw the first quarterly growth in luxury property prices in six and a half years.

State-owned investors are returning to the office market with GIC recently forging a deal with British Land for a 38-story development at 2 Finsbury Avenue, the former site of UBS’s London offices. GIC's project comes in the context of forecast GBP46 billion (US$65 billion) of international investment in London's property market in 2021, according to estate agent Knight Frank's research. The slew of capital is led by China, which is set to represent over a quarter of real estate acquisitions at GBP12.6 billion (US$17.8 billion), followed by Singaporean investment at GBP5 billion (US$7 billion).

For Arab SWFs, the temptation to follow other investors and return to prime London real estate and luxury retail is growing, although the reduction in international travel may dissuade them from the kind of big-ticket luxury hotel acquisitions they made in the past. 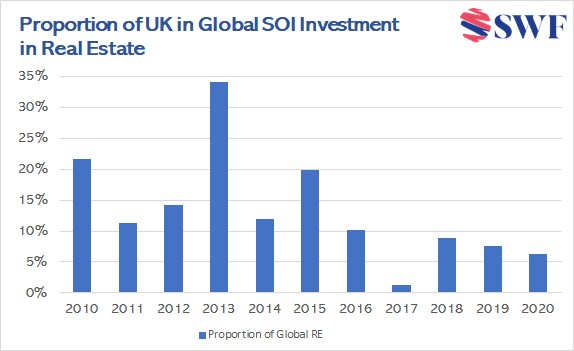