APG, CalSTRS and ADIA Accelerate the US Renewables Bandwagon

The formation of a US clean energy firm Arevon Energy by APG, CalSTRS and ADIA this week comes hot on the heels of US Senate approval of a US$1.2 trillion bipartisan infrastructure bill that underscores the Biden administration’s renewable energy agenda.

Arevon is formed from a merger between a spun-off Capital Dynamics clean energy infrastructure team and its Arevon Asset Management. The three state-owned investors are long-standing investors with Capital Dynamics.

Arevon’s platform includes 4.5GW of operating and under construction renewables, including solar farms and battery storage. A further 3.0GW of capacity is planned.

The business ties in with the US’s infrastructure program, which includes US$73 billion in clean energy transmission investments, including power infrastructure upgrades and new transmission lines to support renewables growth. The government is also offering US$6 billion in grants for battery processing, recycling, and manufacturing grants to enable a scaling up of national battery manufacturing, including utility-scale energy storage. The bill includes US$7.5 billion for a national network of EV chargers, which will require growth in generation capacity to support the infrastructure along highway corridors and in communities.

These measures are intended to support the new US commitment to reduce economy-wide net greenhouse gas pollution by 50-52% from 2005 levels in 2030. As the power sector represents a quarter of US GHG emissions, it will be a key target.

Global SWF data has found that renewables were already outpacing SOI investment in oil and gas infrastructure, including pipelines and refineries, before President Biden came to power. Despite the Trump administration’s scepticism towards climate change and desire to bolster fossil fuels, SOIs poured billions into clean energy production. 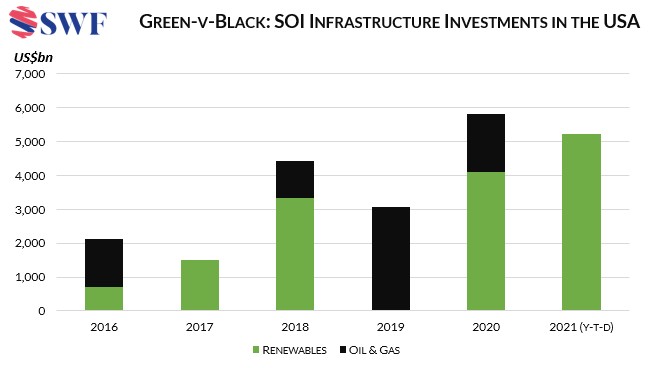 Altogether, sovereign wealth funds and public pension funds directly invested US$14.7 billion in renewables private equity deals in the period 2016 to date. Canadian funds have featured prominently, comprising nearly 60% of the combined capital with CPP Investments leading the pack representing a third of investment. Dutch pension funds APG and PGGM also feature as investors. Meanwhile, Abu Dhabi’s ADIA is the leading sovereign wealth fund in US renewables and CalSTRS leads among domestic public pension funds thanks to their involvement in Arevon.

We expect to see a broader range of SOIs enter the US renewables sector, particularly Norway’s NBIM which plans to allocate 1% of its portfolio to renewables in Europe and North America by end-2022 – potentially providing up to US$140 billion of capital over the next 18 months, if it can find projects to finance.

The Biden administration’s commitment to clean energy will boost direct investment in renewables. Although energy policy is driven by state and local governments, at a federal level there will be additional regulatory and budgetary support to strengthen onshore wind and solar growth and stimulate nascent segments such as offshore wind, energy storage and green hydrogen.

At a more local level, the cities of Los Angeles and Chicago and the states of Rhode Island, Massachusetts and Arizona are committing to clean energy targets and are procuring renewable energy projects with the likelihood of more states joining them as the sector gathers pace. Utilities and corporations are also weighing into investment, resulting in an increasingly large project pipeline.

The development of multi-state transmission networks are crucial to connecting electricity from generation in central US to population centers in the East and West coastal areas. Yet, progress is slow and infrastructure bottlenecks could pose an impediment to investment, which will limit the transmission network in states with the biggest wind resources.

On the upside, under the US$2.3 trillion American Jobs Plan, unveiled by President Biden in March, US$100 billion is pledged for power and energy infrastructure, including a 10-year extension of tax credits for renewable energy and storage projects. This could further incentivize efforts to develop an integrated and vibrant renewable power sector that can attract the bulk of global SOI investment in the sector. 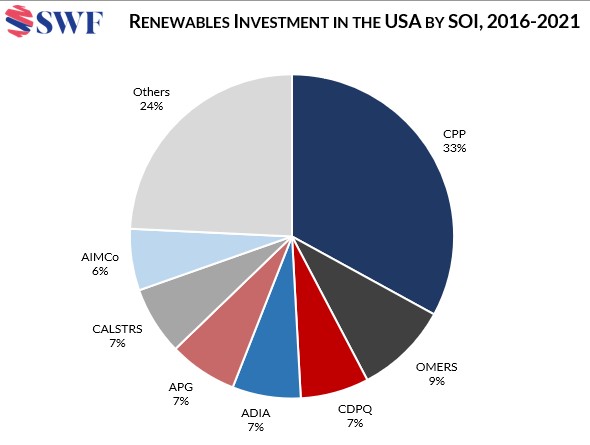