The China Investment Corporation (CIC) has followed the trends of other sovereign wealth funds, reporting double-digit growth for 2020, but underneath the headline figures there are signs of ongoing changes in strategy and organization.

CIC’s overseas investment achieved a 14.1% return, while AUM for the whole fund grew 16.8% in US$ terms to US$1.21 trillion, which secured its place as the world’s second biggest SWF. The outcome confirms Global SWF’s estimates, published in March, based on preliminary data. Its net annualized overseas 10-year return is 6.8%, putting it 128 basis points above its target.

Asset allocation did not undergo any radical change over the year and remained relatively stable, although the reduced weight in stocks and bonds suggested a strategic pivot, particularly given the high returns in these asset classes reported by other SWFs. The change is in line with a shift seen over recent years in which CIC has reduced its public equity holdings from 45.9% in 2016 to 38.0% in 2020 while raising alternatives from 37.2% to 43.0%. 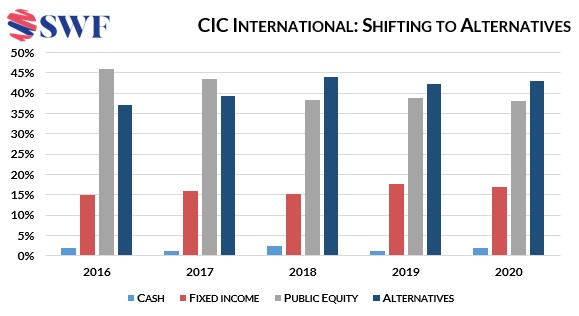 There was significant growth in CIC’s tech investment, which rose from 18.0% of public equities in 2019 to 20.4%, aligning closely with its peers. CIC has indicated it is banking on new technologies and new industries spurred on by innovation, 5G and the digital economy, which have been given rocket boosters by the pandemic - although growth in stock value also drove the increase of tech in the portfolio. Meanwhile, financial services and consumer discretionary stocks declined, largely due to the impact of lockdown measures.

Part of its global strategy is devoted to forging relationships with other institutional investors. Earlier this year, Zhao Haiying, CIC’s Chief Strategy Officer, said the fund is looking to actively expand the coverage and investment amount with GPs and would “dig deep for co-investment opportunities, and promote new models.”

Investment partnerships are a growing theme. CIC is co-investing with private-equity fund managers such as France’s Eurazeo SE and Japan’s Nomura Holdings and secured investments via its UK-China Cooperation Fund, Japan-China Capital Partners and two other cooperation funds with Italy and France. CIC is renewing its push for long-term investment opportunities in the US. The China-U.S. Industrial Cooperation Fund, co-established with Goldman Sachs in November 2017, has completed two investments in the US, but has raised just half its US$5 billion target due to a change in strategy, according to Reuters’ sources earlier this year.

Another theme emerging from the annual report and past statements is CIC’s increasing interest in ESG. The annual report states the fund has “established a sustainable investment policy framework and theme-based investment strategy, integrating environmental, social, and governance (ESG) factors into the investment management process.” Zhou previously pointed to the “positive correlation between ESG indicators and performance”, noting that “more and more investors have realized that incorporating ESG indicators into investment decisions can achieve higher yields.” With China pushing towards carbon neutrality in line with the Paris Agreement on Climate Change, we can expect to see CIC’s investments increasingly oriented towards environmental sustainability.

There are signs that CIC is reducing its direct investment role in foreign investment. Its global investment team has declined to 28% of the organization’s total workforce, down from 30% in 2019 and 75% in 2011. There is no change in its domestic-foreign portfolio split: its domestic holdings grouped under Central Huijin remain around two-thirds of the total portfolio with the remainder comprising its international investments.

The reasons are more likely related to talent retention, which could also explain why it has increased its external dependency on managers, which now represent 56% of the global portfolio, up from 52% in 2019. CIC appears determined to boost recruitment of high-calibre professionals, as well as nurturing talent within its existing workforce with a number of hiring and training programs. By utilizing online platforms, it has increased employees on training schemes by 40% to more than 7,000 and raised the total training hours by 84% to nearly 110,700. At the same time, it is introducing incentive schemes. If it succeeds in its retention and hiring efforts, CIC may pare back external management and boost its global investment teams. 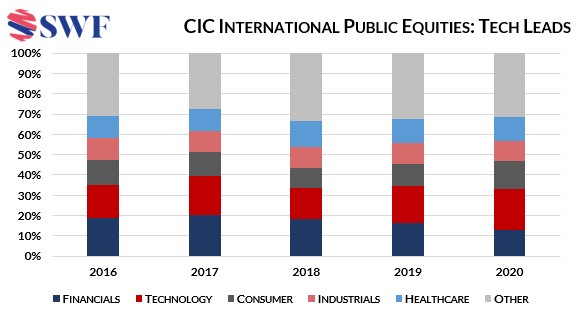