The IPO of AD Ports has injected liquidity into the portfolio of its majority owner, the Abu Dhabi sovereign wealth fund ADQ – but with this comes volatility in the value of the fund’s portfolio, subjecting it to the turbulence of public markets.

ADQ states its mission is to “extract value” out of the state assets through whatever means available, according to CEO Mohamed Hassan Alsuwaidi, who was previously an executive at Mubadala. He told Bloomberg last year, “Every single asset, every day of my life, will continue to be on the list to be taken public or monetized. And that will happen day in, day out.”

AD Ports made its debut on the Abu Dhabi Exchange on Tuesday, raising AED4 billion (US$1.1 billion) in proceeds from the primary issue. AD Ports Group operates the deepwater Khalifa Port in the Abu Dhabi emirate, along with other ports and logistics parks there, and the Indian Ocean port in the emirate of Fujairah. It also operates a facility in Guinea.

Before listing on the ADX, ADQ had transferred to ADPorts a 22.3% stake in logistics major Aramex and 10% stake in UAE-based National Marine Dredging Company (NMDC) to help beef up its value and attractiveness to investors.

The IPO has led to some changes in ADQ’s asset allocation. Global SWF examined the market values of the US$110 billion fund’s assets and found that the listing of ADPorts led to a decline in allocation to unlisted infrastructure from 35% to 30% of AUM and an increase in public equities from 21% to 26%. However, the gains in ADPorts’ value only partly offset the significant decline in the value of the Abu Dhabi National Energy Company (TAQA), which has suffered a 13% drop in stock price since mid-December, wiping over US$5 billion from the value of ADQ’s portfolio.

Further listings of ADQ assets are expected, notably in the new entity created from the merger of Arkan and Emirates Steel to create the UAE’s biggest steel and buildings material company, majority owned by sovereign wealth fund ADQ’s Senaat. 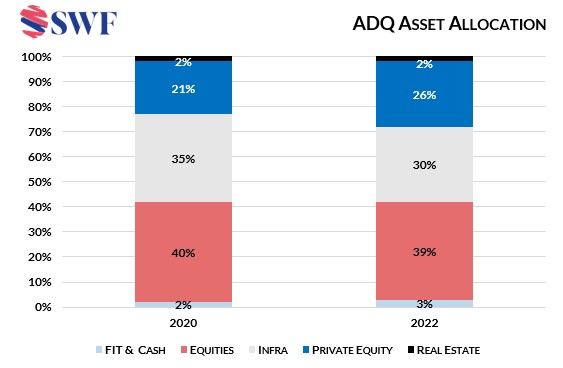 The Abu Dhabi fund is making a rapid transition towards rebalancing its portfolio with private equity with foreign assets a growing focus. The sale of a quarter of ADPorts equity through public listing gives it more dry powder to devote to its venture capital strategy, which is heavily oriented towards high-growth emerging markets, notably Turkey, Egypt and India.

In November, ADQ signed a deal to support US$10 billion of investments in Turkey, including in the energy and health sectors. ADQ also signed a partnership pacts with the Turkey Investment Office to explore opportunities in energy and utilities, healthcare and pharma, agriculture, transportation and logistics. With CCN Holding, it also plans joint investments in hospitals and clinics.  In June, ADQ joined Abu Dhabi stablemate Mubadala in a US$550 million Series D funding round for online grocer Getir. In August, ADQ co-led a US$1.5 billion venture capital round for e-commerce platform Trendyol.

Egypt is also a major focus. ADQ announced in December that it had established a new office in Egypt to bolster its investments in the country and support co-investments with The Sovereign Fund of Egypt (TSFE). The Abu Dhabi state holding company created a US$20 billion strategic investment platform with TSFE in 2019, targeting pharmaceuticals, healthcare, financial services, utilities, agriculture, and real estate.

ADQ has an intense interest in Egypt. In September 2021, it formed a consortium with Aldar Properties – a Mubadala portfolio company – to buy a 90% stake in Egypt’s Sixth of October for Development and Investment Company (SODIC), a real estate developer listed on the ADX.  The state-owned investor acquired Egypt’s Amoun Pharmaceutical Company alongside TSFE in March. In October 2020, ADQ signed a non-binding agreement with the Middle Eastern Lulu International Holdings (LIHL) supermarket chain, which could invest up to US$1 billion in expansion of operations in Egypt. By establishing an office in Cairo, ADQ indicates its relationship with Egypt will broaden and deepen.

ADQ has established the Alpha Wave Incubation Fund, indicating that it is not just relying on external asset managers to leverage early-stage opportunities but is also rapidly building up the capacity of its in-house team. Research by Global SWF has identified a venture capital team at least as large as Abu Dhabi stablemate, the Abu Dhabi Investment Authority, and it has been building interests in early-stage businesses in India and Southeast Asia – a massive shift in emphasis from an erstwhile infra holding company.

ADQ is also looking to draw together domestic assets into an integrated platform. In January,  ADQ launched a US$5 billion healthcare platform – Pure Health – that is set to become the UAE’s biggest healthcare provider. Pure Health marked the consolidation of several UAE healthcare assets in ADQ’s portfolio, including Abu Dhabi Health Services Company (SEHA), The National Health Insurance Company (Daman), Tamouh Healthcare, Yas Clinic Group and Abu Dhabi Stem Cell Center. The portfolio represents a highly integrated provider, covering health insurance, hospitals, laboratories and medical supplies, which could be the basis for greater diversification – including into biotech and in other geographies. ADQ will be the largest shareholder in Pure Health; other shareholders include Alpha Dhabi Holding, International Holding Company (IHC), AH Capital and Ataa Financial Investments.

ADQ also has domestic economic diversification goals, notably in reducing food import dependency in a largely arid country. In September, the fund announced plans to create the UAE’s first fresh produce AgTech Park. The project is part of the Abu Dhabi Ports’ free zone cluster and follows a similar approach taken by Singapore’s Temasek, which is backing agtech venture capital which goes hand in hand with the city state’s creation of an Agri-Food Cluster Transformation Fund to strengthen its food resilience.

Infrastructure and domestic economic diversification will remain the SOI’s core activity. As Alsuwaidi has stated, “We do have characteristics of a sovereign fund. But we are defined in our articles as a holding company with developmental nature. And so, core to our bread and butter, is that developmental nature of our investments and our deals.”

Its commitment to domestic infrastructure was demonstrated with its involvement in the US$2 billion joint venture with ADNOC in the petrochemicals sector, Ta’Ziz, announced in November 2020. This will include a new port, utilities, infrastructure, feedstock supply and shared services. It also acquired a 10% stake in ADNOC’s gas pipeline assets in October 2020, costing it over US$1 billion. 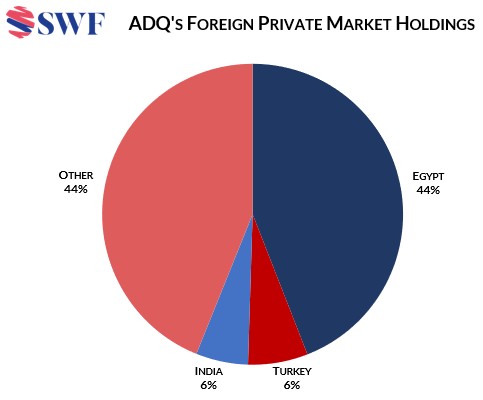