ADIA Surges and Focuses on North America and Active Management

The Abu Dhabi Investment Authority (ADIA) has finally published its 2021 annual report, indicating strong annual returns supported by surging public equities that lifted its 20-year annualized rate from 6.0% to 7.3% - although the world since end-2021 has transformed and the situation is significantly different 10 months on.

The improvement in the 20-year return is also influenced by the removal of a particularly bad year, 2001, from the moving average.

Asset allocation has shifted yet ago with a shift away from bonds and stocks towards private equity and infrastructure. ADIA is in the process of restructuring and overhauling its internal organization with North America firmly in its sights, representing a long-term portfolio target of 45-60% of AUM. The allocation target range for North America has been ramped up 11%, at the expense of all other regions with the UK, China and Japan likely to account for the declines in Europe, Emerging Markets and Developed Asia, respectively. 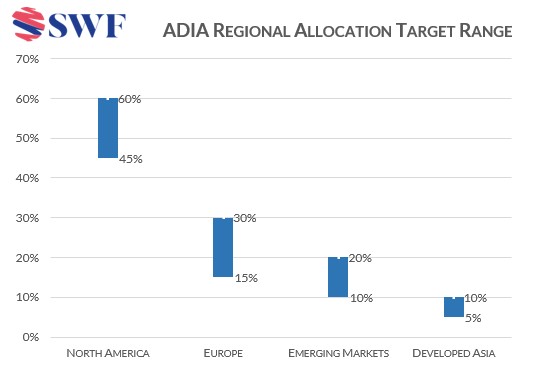 ADIA has increased its internal and active management over the past decade, indicating an increased sophistication and responsibility of its team as it matures as a fund. Internal management has been ramped up from 20% to 54% in the past 10 years, and active management from 40% to 58%. At the same time, its number of personnel have dropped from 1,750 in 2016 to 1,520 in 2021, while at the same time Emirati personnel have been increasing their proportion of the headcount; the number of North American, European and Australasian personnel have not changed while the rest of the world has diminished. ADIA said it also boosted front-line managers' autonomy, part of a wider push to simplify internal systems and improve ability to act quickly on fast-moving opportunities.

The US$829 billion fund is heavily investing in its quant teams and machine learning. More than 45 people have been recruited to the “Q Team” and some investment teams. This month, it announced plans to open an advanced data research centre, ADIA Lab, which will formally launch in December, headed by Horst Simon as director, who was previously at Berkeley Lab and at the U.S. Department of Energy. It is part of Abu Dhabi’s drive to promote digitalisation and advanced technological applications "while helping to embed a scientific mindset throughout its organisation.”

ADIA also announced the appointment of Pascal Blanque  as global head-quantitative research and development in its strategy and planning department, after 17 years as group CIO and head of the investment management platforms at Amundi. Joining in November, Blanque will be part of a multidisciplinary group of R&D heads, assisting with the development and implementation of investment strategies.

In terms of restructuring, the fund established a Core Portfolio Department, which it said allows "more efficient, flexible trading and rebalancing". In a nod to total portfolio management, it has set up a Central Investment Services Department to create "a single point of visibility" for the total portfolio. 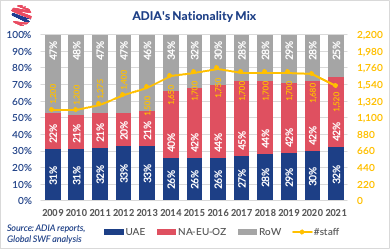