ADIA Secures 20.9% Annual Return as it Shifts Towards Private Markets

Abu Dhabi’s largest sovereign wealth fund, the Abu Dhabi Investment Authority (ADIA), has out-performed its global peers, notching up a 20.9% annual return at end-2020 led by robust performance in capital markets, according to Global SWF estimates based on figures in its annual report published today.

Global SWF estimates ADIA’s total AUM rose to US$829 billion by end-2020, making it the world’s third biggest sovereign wealth fund after NBIM (US$1.37 trillion) and CIC (US$1.22 trillion).

The Abu Dhabi fund’s performance has not particularly shone in the past few years, according to Global SWF’s estimates, but it has rebounded despite a significant capital call from its Government, after the emirate’s 5.9% deficit in 2020.

Although it continues to invest through external managers, ADIA is beefing up its own capacities with an increase in internal asset management from 45% to 50% of the total portfolio – equating to more than US$40 billion of assets moving from external managers to the direct management of ADIA’s teams.

ADIA’s creation of its “Science Lab”, drawing on high-skilled researchers and developers, is a move towards developing more radical innovations that might disrupt institutional investment management – a trend towards involving AI and machine learning in decision-making that was started by GIC in 2017. Yet, the move indicates the Abu Dhabi fund is not simply shadowing GIC, but rather seeking to develop its own strategy and in-house methodology to boost returns that have been, in recent years, disappointing.

At the same time, the Emirati fund is seeking to align its strategic asset allocation with the norm in the sovereign investor universe. The annual report indicates a shift towards private markets with allocation bands for private equity rising from 2-8% to 5-10% while infrastructure is raised from 1-5% to 2-7%. At the same time, public equities will continue to lose weight in the portfolio with internal and external equities combined into a single department, which sees its representation in the Investment Committee reduced.

In terms of geographical exposures, the target band for Developed Asia was reduced from 10%-20% to 5%-15% as ADIA removed its internally managed Japan mandate and the Equities Department reallocated resources to other markets that “offer more sustained outperformance in the future.” The shift towards emerging markets is set to continue in 2021 with plans for the introduction of new externally managed Andean equities mandate. 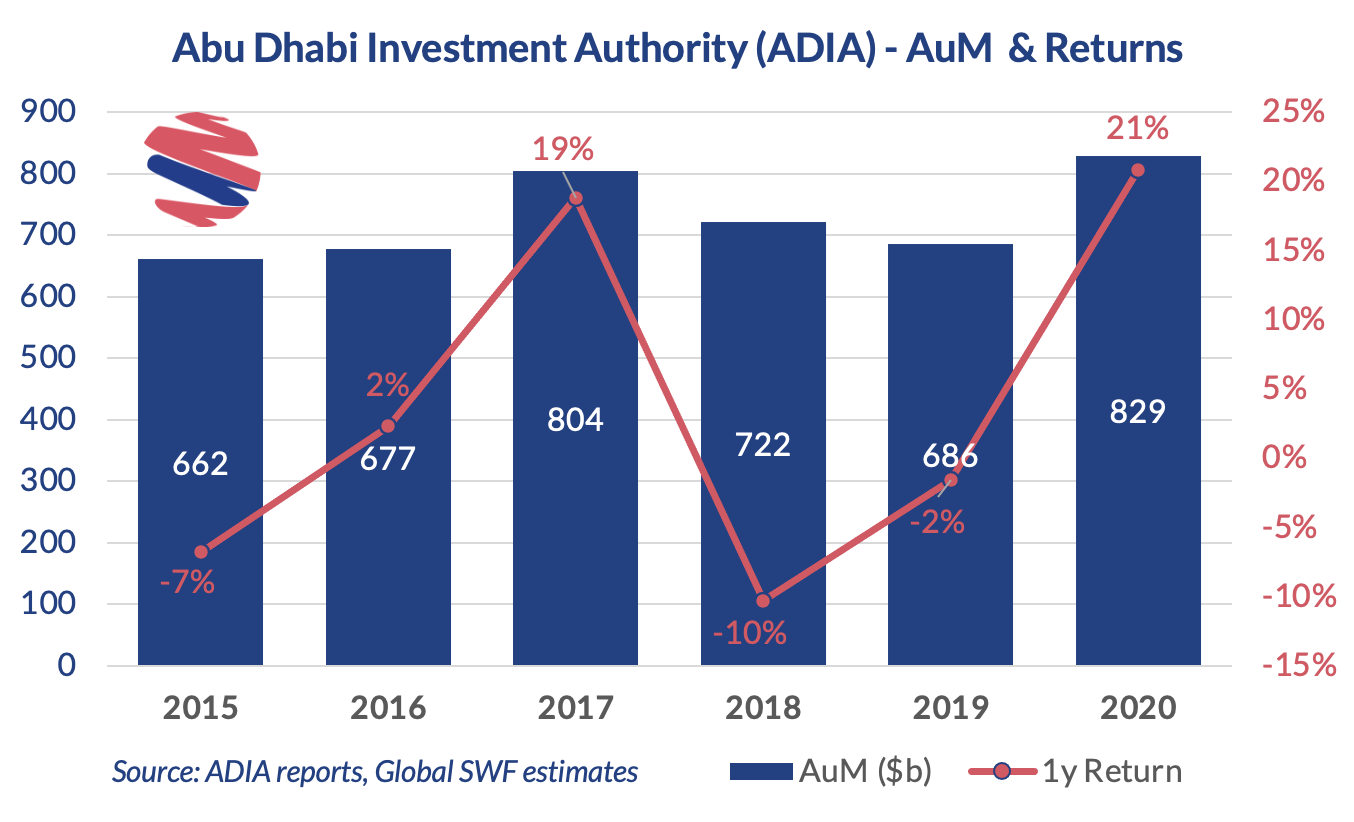 In 2020, ADIA’s Private Equities Department deployed more capital than in any previous year with direct investments and co-investments representing 55% of the total, up from 45% in 2019, with the remainder committed to funds. PED completed 24 direct investments in 2020, up from 18 in the previous year, in addition to investments in early-stage companies alongside its venture capital partners. Digitalization, innovation and healthcare will remain a core focus of its VC activity as the fund seeks to make the most of the disruption caused by the pandemic.

India is a prime target for ADIA, which has invested alongside GIC in renewables producer Greenko Energy and, this year, a Blackstone-led consortium that took control of Indian IT outsourcing services provider Mphasis. Last year, it joined other sovereign investors in funnelling huge equity investments in Reliance Industries’ digital infrastructure, e-commerce and mobile telecommunications subsidiaries.

ADIA is a backer of India’s NIIF and Indonesia’s INA, joining other sovereign investors looking to ramp up exposure to emerging market infrastructure. These quasi-SWF organizations enable institutional investors to tap the yield potential of real assets in fast-growing markets, while benefitting from government support and knowledge of the  market  and  local  networks. ADIA has not just restricted itself to Indian infrastructure, but also backed startups such as food delivery company Zomato and digital payments platform MobiKwik in late-stage venture capital funding rounds.

In Southeast Asia, , in July ADIA allocated US$500 million of investment in EdgePoint Infrastructure, which is set to acquire, develop and operate telecommunications towers and distributed antenna systems in the region.

Machine learning and artificial intelligence are being integrated into investment decisions by ADIA which has, since September 2020, formed a team of high-profile mathematicians and scientists to run its own Science Lab. It hired Spaniard Marcos López as the Global Head of the new group "Quantitative Research & Development" and it has since hired - at least - 23 other senior executives in the team.

All the researchers and developers have a very strong quantitative background and have been recruited from top notch hedge funds and academic institutions from across the world. They now work under the patronage of the Strategy & Planning Department led by Majed Al Romaithi, and in parallel to the recently merged Equities department and to the Alternative Investment department, which invests in hedge funds directly. 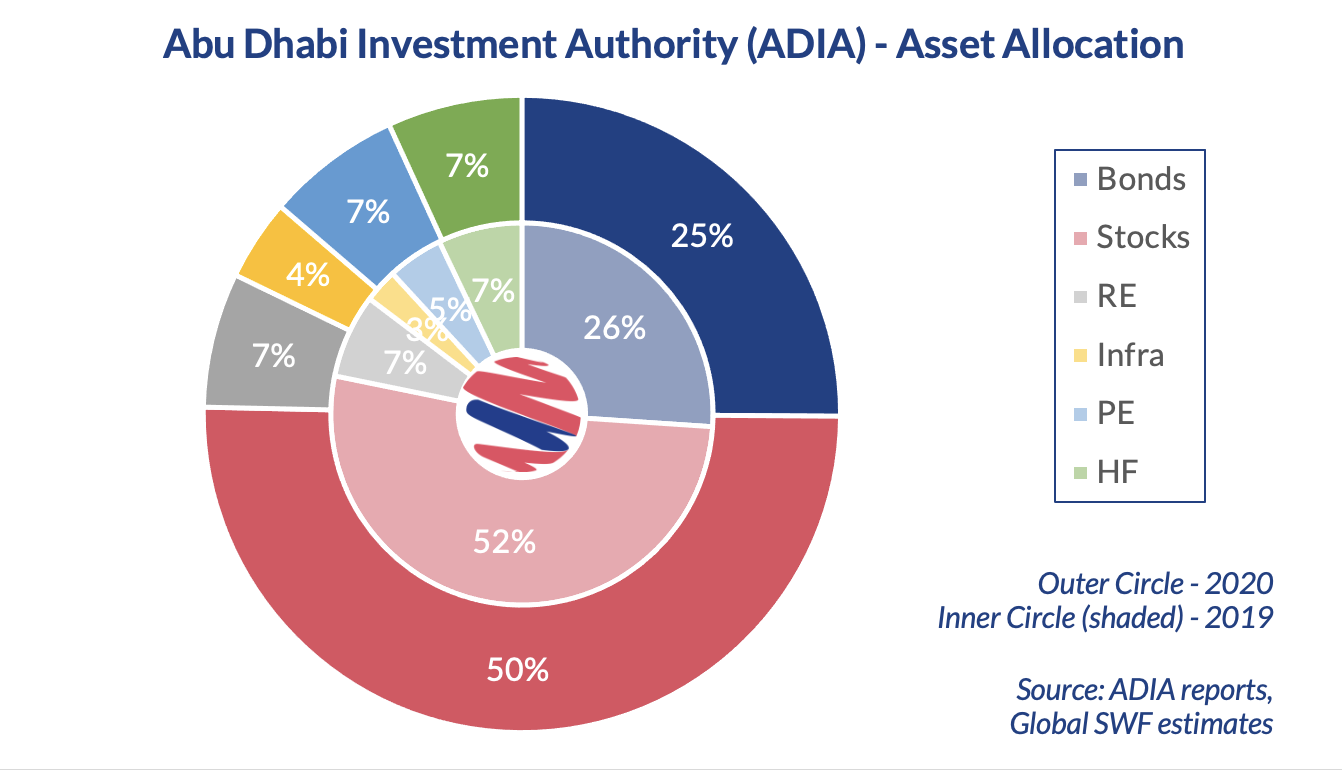