Finding a consistent and massive out-performance of its green investments over its fossil fuel portfolio, Global SWF said: “Financial returns have stopped and must stop being an excuse, as evidenced by the present analysis on returns.

“If the fund had divested all of its black stocks and re-invested that capital into green stocks instead in December 2016, its balance sheet would have been 5.2% larger today.”

The opportunity cost of the failure to redeploy fossil assets into green investments at end-2016 totals nearly EUR26 billion, based on returns in the period to date.

Global SWF adds, “The key message is that there is no reason for ABP not to divest from its (still very significant) portfolio of fossil fuels stocks, and not to use those proceeds to pursue more investments in companies engaged in renewable energy, whether listed or not.” 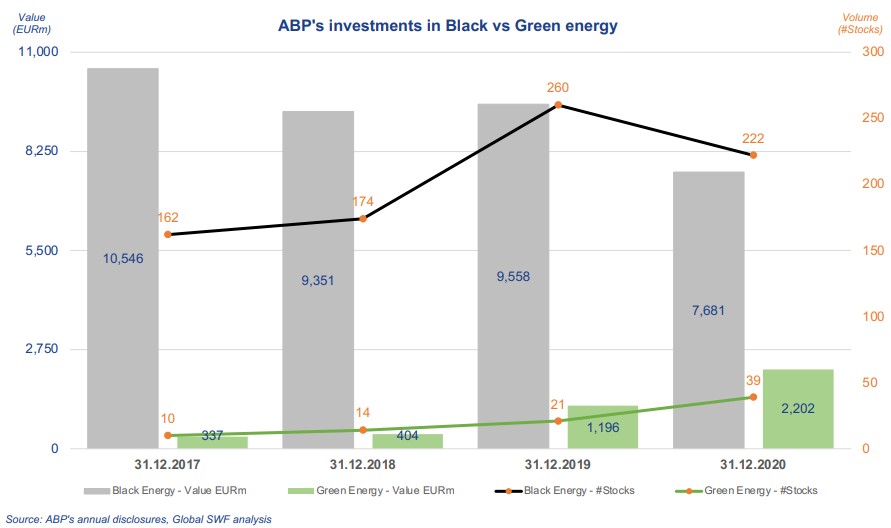 The findings appeared to have an impact on ABP’s sustainable investment policy, which has come under fire from Fossielvrij for allegedly failing to use its financial muscle to support a sustainable energy transition.

Today, ABP president Corien Wortmann told a protest organized by Fossielvrij outside the fund’s Amsterdam office that the managers will implement faster divestment of fossil fuels. She said: “We want to be a leader in the energy transition, but have hitherto shown insufficient leadership. Therefore we will formulate new, more ambitious goals to contribute to the Paris Climate Accord.”

Wortman’s statement failed to satisfy Fossielvrij, which claimed that she failed to commit to any targets. Nevertheless, ABP has committed to set out its new climate goals in coming months in cooperation with its asset manager APG and a new policy is expected to be in place in 2022.

Global SWF concluded: “We wonder if this change has been sufficient and the reason for black stocks to still weigh as much, especially given the fund’s sustainable and responsible investing objectives, and despite the absence of O&G and coal in its latest exclusion list. The key message is that there is no reason for ABP not to divest from its (still very significant) portfolio of fossil fuels stocks, and not to use those proceeds to pursue more investments in companies engaged in renewable energy, whether listed or not.”

Global SWF's research on ABP's black-v-green portfolios echoes the findings of research into Norges Bank Investment Management's (NBIM) gigantic US$1.3 trillion Government Pension Fund Global (GPFG). The results of joint research by Global SWF and non-governmental organisation Framtide showed oil and gas equities held by the world’s largest sovereign wealth fund lost 11% over the three-years to December 31, 2020, while its green stock holdings earned a return of 316%. This equates to an opportunity cost of $125.8 billion. NBIM's balance sheet would be 10% larger today if the fund had fully divested from oil and gas stocks and reinvested the money into renewables in November 2017, the research found.